At Ijeh Barrack on the Lagos Island, Abba said what he had seen was an eyesore which required attention.

“If not that I don’t have where to put them today, I would have relocated the policemen, knocking down one, two structures and rebuild them to a human habitable status,” he said.

The chairman bemoaned lack of water, leaking roofs in almost all the barracks and equally promised to renovate the barracks that are still good to a human habitable status, with the provision of modern toilets, flowing water, safe roofs where water will no longer leak into rooms, safe electricity.

He also evaluated the state of dilapidation at Mopol 20 Police Barracks and the Police College, Ikeja and emphasised that President Muhammadu Buhari-led administration had deemed it fit to unprecedentedly initiate the Trust Fund in order to improve and place the Nigeria Police ahead of her global counterparts, especially in the areas of training, welfare, logistics and a host of others, for a more efficient security service in the country.

That remark received applause from policemen, who interfaced with him during the tour. 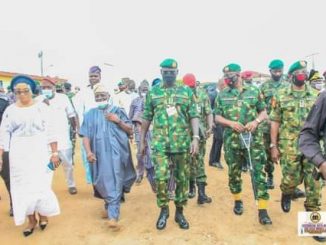