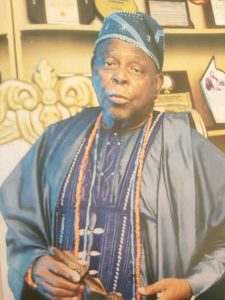 Though the secret lies on a chapter of his autobiography-Osundagbonu: The Sole Journey of A Priest-presented at his 70th birthday ceremony in 2017, question is regularly raised over his middle name.

However, the Araba of Osogbo, Ifayemi Elebuibon yesterday in Ibadan, the Oyo State capital, revealed the reason behind his Osundagbonu name.

As a guest speaker at the 2022 edition of the Yoruba Heritage Awards, Elebuibon said the name connected strongly with his birth being a child blessed his parents by the Osun goddess.

“My mother had my pregnancy through her intake of water drawn from Osun River. After I had been born, whenever I was hit by malaria fever, my regular ailment, she only needed to rub my body with the water and that would bring relief to me,” he disclosed.

Consequently, Elebuibon urged his listening audience and the Yorubas generally to insist on names which reflect their cultural value for their new babies.

Aside name, he also highlighted two other elements as important to identity of all ethnic groups.

Language and greeting, he said, point to place one comes from, cautioning Yorubas from allowing foreign values to eclipse those of their race.

He added that to reverse Yoruba language from the current threat, campaign must start from individual homes acclaimed as the first point of contact of every child.

“When a child wakes up in the morning, he must be instructed to prostrate or knee down before parents. A wife who wakes up and greets her husband respectfully will always win heart of the husband. This practice also has a way of strengthen bond in the family,” he said.

Elebuibon applauded organisers of the Yoruba Heritage Awards and called public for more support to do better in subsequent editions of the ceremony.