Oba Akinde ascended to the throne in September 2021 when Ogun State Commissioner for Local Government and Chieftancy Affairs, Hon. Afolabi Afuwape, handed him the staff of office on behalf of the state Governor Prince Dapo Abiodun.

At the historic event, Oba Akinde, a Fellow of Chartered Accountants, made a passionate appeal to sons and daughters as well as residents of Igbesa to join him in the mission to lead the town to the promise land.
He also sent words to investors in Igbesa to perform their Corporate Social Responsibilities to improve socio-economic life of his people.

The royal father’s call seemed to have yielded fruits by the number of dignitaries who turned out at his ceremony where Barry2 and his band captivated them with variety of lyrics and beats which kept them dancing on the play ground of the All Saints Anglican Primary School.

Oba Akinde was accompanied to the stage by his wife, chiefs and other eminent personalities during which he showed love to Barry2’s scintillating act. 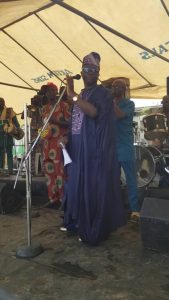 After his performance, the musician, who is the Baala of Ilase, Ogun State, gave glory to God for the success recorded and appreciated the Oloja Ekun and his chiefs for the patronage and demonstration of love to him and his music.

“Kabiyesi and people of Igbesa really surprised me with their love. I thank them sincerely for that. I thank also other kabiyesis who attended the anniversary. Ours is to do a little we can, it is God who crowns the little and make it big. We had fun at the show, and special thanks to member of my organisation too led by Falaki,” he said.