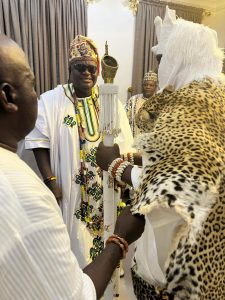 Before his first anniversary in the Ile Oodua Palace, the Ooni of Ife, Oba Adeyeye Eniitan Ogunwusi had made it clear his mission to invest his passion and resources into restoration of the noiselessly diminishing value of Yoruba culture.

Regardless of what is tagged distractions from a critical section of public, Oba Ogunwusi remains firm on his track, hosting a variety of culture-related events either in the palace or the Ile-Ife Grand Resorts sitting on the inward lane of the Ife-Ibadan highway.

In July, 2022, the Ooni went some steps further when he amazed an audience with his talking drum skill at the Ayangalu Drum Festival, cheerfully exhibiting his bond with his cultural inheritance passed down by his progenitors.

Like the Ooni, the Elerinmo of Erinmo, Oba Michael Ajayi Arowotawaya would also not allow his Christian faith to rob him his custodian of culture and tradition role; Since he mounted the stool in 2014, he has spiced and expanded celebration of the Agidanyin Festival, making it more alluring to indigenes of Erinmo as well as players in tourism sector of the economy. 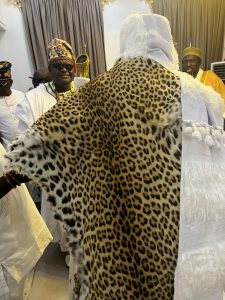 Entranced by Oba Arowotawaya’s devotion to his culture, the Ooni personally honoured him in one edition of the festival during which he released pigeons as a symbol of love, peace and progress of the town.

That synergy was at play again last week when the Elerinmo was one of early arrivals in Ile-Ife for the Olojo Festival among a galaxy of traditional rulers, participating in major events after the Ooni had successfully concluded his seven-day seclusion rites. 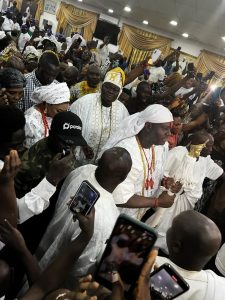 From time immemorial, it was learnt that the Olojo Festival has been annually staged commemorative of the dawn of creation of the heavens and the earth.

Based on the stunning spectacle on ground and in the air since he arrived a day to the grand finale, the Elerinmo acknowledged efforts which Oba Ogunwusi has so far made to further explore what he called trendy avenues to make the festival a global brand “that will not only project the cultural ingenuity of the Yoruba people, but also institutionalise the celebration as a point of convergence for the Yorubas as one people with our festival and one source and that is what we are have witnessed on Saturday in Ile-Ife.”

He testified, “We can all see as well, the presence of some of the corporate sponsors that are faithful brand supporters who have been identifying with the Yoruba cultural pride. All these sponsors who have been supporting and still making sure that the Olojo Festival is still classic and people-driven must be appreciated.” 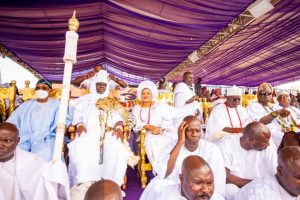 Oba Arowotawaya affirmed Ile-Ife as one of the pristine rallying points for all the Yoruba ethnic group in Nigeria and the diaspora, implying that the Olojo Festival is celebration of the entire Yoruba race.

Not also oblivious of some marked innovations added to the festival, the Elerinmo said it is a potent way to broaden the festival outlook and also “make the celebration a globally-driven which had been attracting both domestic and diaspora patronage.”

He clarified that “a cultural festival is not idol worshiping but considering the avalanche of benefits that could be derived from the Nigerian cultural heritage, there is need to consciously develop and sustain for domestic and foreign tourism patronage. Africans all over the world, especially in the Americas, will know that this land of Oduduwa and Orunmila is their home.”

The royal father also commended the Ooni’s spirituality and passion which he “attaches to the cultural heritage of the people, as he had invested his time and money to make it to this level, and it is very imperative for us all to join force with him to carry on the advocacy.”

While addressing the mammoth crowd at the festival, Oba Ogunwusi said “Olojo dispenses the rich nuances of the past as well as the unforgettable contributions of our forefathers to our existence and greatness.

“At this historic intersection, our traditions and heritage have given birth to modernity and will continue to lighten our paths from darkness. I’m steadfastly committed to preserving, inspiring, and distinctively igniting a desire for the sustenance of their age-old meaning as they continue to serve as our precious treasures.”

Adding, he said, “Anchoring the mantle of the Olojo Festival is the ideal fit for mending our nation’s brokenness. When we turn on the news, read the newspaper, or look at our social media feeds, we see brokenness. We are a broken people in a broken country. We are under broken political systems, governance, education, healthcare, security, religion, etc. Through the lenses of our existence, we don’t have to look far to see brokenness which is reflected in our interactions, conversations, sense of recognition and support for our young people.”

Among A-class dignitaries at the festival was Minister of Interior, Ogbeni Rauf Aregbesola who represented President Muhammadu Buhari and also praised Oba Ogunwusi for his love for peace and his commitment to oneness of the nation.

He also said “Olojo festival was an event in the olden days to showcase farm produce, profits made in farming and agriculture at large. It will gladen my heart if Nigerians could restore the old glory of farming; this Olojo festival too should also bring back the old days of showcasing farm produce, hardwork and good character. The festival should not be for merriment alone. Merriment should come after work. There should not be merriment without work. Working is the antidote to poverty.” 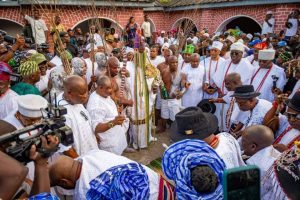 Like Buhari, Osun State Governor, Alhaji Adegboyega Oyetola, was also absent but represented by his Deputy, Mr Benedict Adegboyega Alabi who also congratulated the Ooni and added “As a government, we remain committed to our electioneering promises and we won’t renege on our pledge to make life better for all.”

Nigeria’s Ambassador to Jamaica and the Caribbean, Ambassador (Mrs.) Maureen Tamuno, stated that a lot of people in the diaspora particularly in the Caribbean have traced their roots back to Nigeria and festivals like Olojo will be instrumental to reuniting them with their kinsmen.

The festival was witnessed by business tycoons, political office holders, international tourists and observers from countries like Brazil, Cuba, Jamaica and America. 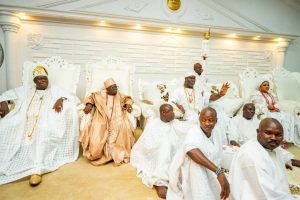 Director, Media and Publicity, the Ooni’s Palace, Otunba Moses Olafare closely monitored coverage of the crowd-pulling fiesta. He said, the Ooni was complemented by his Queen, Olori Mariam Ajibola Ogunwusi and members of the royal (Giesi) family.