In company of two wives, the Alaafin of Oyo, Oba LamidiOlayiwolaAdeyemi attended the 60th birthday of the Olu of Itori, Oba AbdulfataiAkoredeAkamo in the Egba town on October 1.

Decked in a maroon ofi fabric, Oba Adeyemiarrived the King’s Court venue of the reception ahead of time just as he did during the 15th coronation anniversary of Oba Akamo on April 6, 2019 at the same venue.

Guests inside the tastefully decorated hall rose as Oba Adeyemi was led to his seat at the elevated platform where he was joined by other traditional rulers, including the Olu of Ilaro, Oba TaiwoOlugbenle, theElegusi of Ikateland, Oba SaheedElegusi and other monarchs and chiefs of the Olu of Itori.

The Alaafin declared that his presence at the occasion was based on his recognition of the Olu of Itori’s genuine love for culture and tradition, which he (Alaafin) symbolised in Yoruba nation. He said, it was not an happenstance that he was always in attendance at Oba Akamo’s function.

“OluItori knows his onions among Yoruba Obas. Such a person deserves this honour. He is matured in his disposition and a stickler to all that is good. I cannot but come here personally to identify with his diamond age and wish him many happy returns.

“He respects the elders, and that attribute gives him free access to me any time. I am also wishing him many happy returns of the day. Being born at the eve of independence is a rare privilege, which must have inspired him to reach for the peak of his life,” he noted.

The highly elated Oba Akamo and his wife, OloriBarakatAkamo expressed delight at the presence of Oba Adeyemi whom they both described as believer in them for always turning up at their occasions and bringing more glamour to them.

Oba Akamo said he could not thank Oba Adeyemi enough and prayed for his safe journey back to Oyo, promising to always make himself available at the Alaafin functions.

“Baba has always lived his status as our father, adding value to our events here. He has also shown that we can always count on him. I think that one of the reasons he is revered and held in highest esteem by the personalities that matter. I am grateful for his presence and wishing him journey mercy back to Oyo,” he said.

OloriAkamo was full of gratitude to the array of guests and her friends who turned out in large number at the party, expressing her joy and also wishing them well in their undertakings. She said she was overwhelmed by their presence, which, according to her, was indicative of love among them.

“I am indebted to all of them for coming to honour us. We shall all have cause to be celebrating one another. I also thank IyalojaFolasadeTinubu and others too numerous to mention. God shall preserve all of us for a long life,” she prayed.

The entrepreneur, AlhajiAlikoDangote was represented by one Mr Edwin, who is said to be a top management staff of Dangote Group.

Oba Akamo’s birthday attracted Fuji stars like, K1, SefiuAlao and Hammed Alawiye all of whom performed to satisfaction of their fans.

While the Abeokuta-based Alao staged outside the hall where he gave his fans what they had missed in him following the COVID-19, which disrupted socio-economic activities and led to lockdown in some states of the federation, Alawiye stood in for K1, who arrived in the evening in a white top on wrapper. 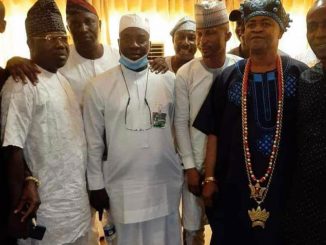 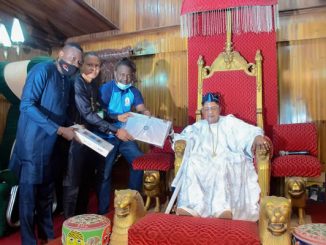