Precisely one week after a renowned Ogun State-based On-Air Personality, MC Murphy went public with a detailed account of how fuji star, K1 allegedly assaulted him in Itori, the headquarters of Ewekoro Local Government of Ogun State, the duo returned to the same scene of the incident and reconciled their differences.

The Tabloid.net gathered that the ceasefire was at the instance of the Olu of Itori, Oba AbdulfataiAkamo, who hosted his 60th birthday reception inside his King’s Court when the incident occurred and raised some dust, especially on social media where emotional reactions for and against both sides reigned supreme.

While it was being speculated that K1 would not honour the invite having allegedly made up his mind to frontally engage the Freelance Independent Broadcasters Association of Nigeria (FIBAN) after the body had held a press conference appealing to the Alaafin Oyo, Oba LamidiOlayiwolaAdeyemi to strip K1 of the Mayegun title he had conferred on him in January, the musician made it to the venue.

“I knew he would not snub the Olu of Itori because he knows the relevance of that traditional ruler in the social and political circle. And Wasiu being a politician himself will not want to lose at both ends. He cannot afford to lose FIBAN and lose a royal father who likes his music,” a source disclosed.

Though members of the FIBAN led by their President, Mr Desmond Nwachukwu arrived the venue ahead of K1 at some minutes past noon, the IjebuOde-born, spotting all-white top over a wrapper, drove himself into the palatial premises in a Hilux vehicle in company of his uniform security aides.

Two fuji acts, SaidiOsupa and SefiuAlao attended the meeting but as observers, because none of them, it was learnt, was called to speak on the issue.

The FIBAN President made his presentation and justified his anti-K1 statement on social media, saying he authored it out of necessity to express the minds of his members who had often complained of K1’s alleged disrespect to them at social gatherings where they served as compere.

MC Murphy also bore his mind and expressed ceasefire based on Oba Akamo’s intervention.K1 shed more light to the events, leading to the alleged slapping, punching and kicking and told the gathering that he had a long relationship with MC Murphy but accused him of breaching his stage protocol during his performance.

He defended that he could not abandon patrons in his front for Murphy and his brother, owning up that he snubbed Murphy when he felt he was disturbing him.

A source clapped for K1 for maintaining his frankness as a person who does not care whose ox is gored on issues affecting his person and band. The source further said that at the meeting, K1 showed readiness to make peace with MC Murphy and FIBAN members, a contrast to a statement credited to him on BBC wherein he dismissed MC Murphy and FIBAN as senseless.

“The atmosphere at the meeting was good, especially with the presence of Oba Akamo whom all of them seem to hold in high esteem. All sides expressed themselves and the matter ended there,” another source said. 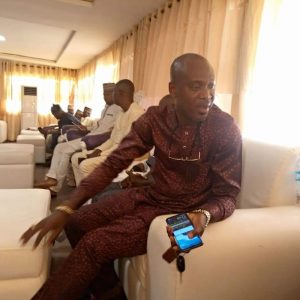 An Islamic scholar from Ifo, Ogun State, Alfa SulaimanAjilogba delivered a short sermon on the need to give peace a chance while Oba Akamo also urged all parties to reunite, specifically admonishing K1 to always be mindful of his status in showbiz subsector.

To further drive home his point for clarity, Oba Akamo drew a metaphor of a ripe fruit in K1, stressing that a ripe fruit is naturally an attraction to everybody passing by the fruit tree.

“I told him to use that wisdom to measure his reactions to issues. I did not call that meeting only because the issue started at my party but also because of my position as royal father to all of them. A father cannot afford to fold his arm while his children are not relating well. These people in showbiz are our pride.

“They are the glory of Yoruba race, and as a Yoruba Oba, I found it a part of my responsibility to bring them together. Yoruba unity is more important to me. So, if I fail to come in now and reconcile them, we cannot predict damage which that crisis could cause ultimately. I thank all of them for honouring my invite, and I am very sure that it is all over henceforth,” he said.

While the one-week war was raging, the Baroyin of Itori, Chief BabatundeBusari joined the discourse wherein he alerted K1 on his findings from plethora of reactions. He wrote: “Finally, having read some pages of reports and opinion about the noise, my conclusion is that K1 should be aware that out there are armies of soldiers who have lost hope on his human relations and, thus, ready to slug it out with him should he cross their path.”

READ MORE  'IGP is sacrificing everything to cleanse the Force'

A sumptuous lunch dished by an Abeokuta-based catering service, formally rounded off the meeting after which everyone departed for their different destinations afterwards. 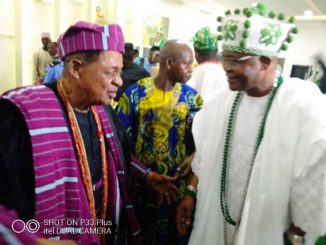