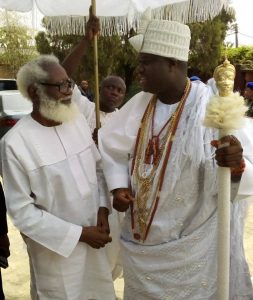 For all its notoriety, we have Mushin, a suburb in Lagos, to thank for many stars that have gifted the nation and the world with their talents in music and story telling.

From Sikiru Ayinde Barrister to Wasiu Alabi, SunnyT Adesokan and also Muritala Sule, a man of many parts…author, screenwriter, movie director and journalist.

His writings include Shadows of Hunger (Longman, 1987 novel); A Lifetime of Friendship; a recently published memoir and several yet-to-be published manuscripts.

His movie credit includes Oju’nu which was a blockbuster when it premiered at the National Theatre Cinema, also Gbedunrin and The Other Children.

He was part of the writing team for the crime series SPACS on NTA, as well as co-creator. He was part of Genius, a show on African Independent Television (AIT) as writer and script editor.

He created and hosted Lagbo Video, Nigeria’s pre-eminent television talk show, exploring and showcasing the world of movies and movie stars on NTA,l Ikeja, Channel7 between 1994 and 1999.

Muritala Sule won the Distinction Award for Scriptwriting at the 1985 National Scriptwriting Workshop of Nigerian Television Authority (NTA) and has served as a Film Script Consultant to the French Cultural Centre (Embassy of France).

His short film script was one of the six that earned a place at the first New Directions Workshop of MNET International in Nigeria in 1998.

At other time, he was a senior editor at Media Review, the defunct, but highly enjoyable watchdog of Nigerian journalism.

His script for the short film, Duty, won a national contest in 2005 and wa produced by the Nigerian Film Corporation.

Despite all the above qualities and achievement, the amazing thing about Murital Sule’s choice to script the film on Kiriji is that the Director Niji Akanni, also an accomplished writer and director, suggested him.

As the sage, Chief Obafemi Awolowo, rightly said, only the deep can call to the deep. Producer Bola Anike Obot has implicit trust in Niji Akanni’s judgement.

The scripting of Kiriji has gone through professional process, research and consultation.

Based on the 16-year war between Ibadan and Ekitiparapo; with the support of the Egba, Ijesa and the Ijebu. With the number of Yoruba tribes and dialects involved, there are so many sides to the story. Care has to be taken to give objectivity and truthfulness primacy so as to avoid an inaccuracies.

The draft of the story, based on several historical sources, was presented to the Yoruba monarchs at the Kiriji script conference sponsored by the Ooni of Ife, Oba Enitan Ogunwusu Ojaja II in 2015.

The conference was well attended by 70 per cent of obas from Ekiti as well as the late Olubadan, Oba Saliu Adetunji and the Alaafin of Oyo Oba Lamidi Adeyemi. Several of the descendants of the Kiriji warriors; like Latoosa of Ibadan, Ogedengbe of Ilesa as well as Fabunmi ofOke Imesi also attended.

The draft, read with crisp Yoruba delivery by Biodun Adekanbi, was received with rousing ovation and accepted by all the attendees as fair and objective.

We have the story like a fine clay but the screenplay still needed a mastercraftsman.

Niji was initially expected to break the story down to screen story. But he deferred to Muritala Sule and, in December of 2022, the man once described by Dr. Kole Odutola as the man with a thousand stories was able to deliver a brilliant script that mixes humour with the shocking horrors of war and devastation on the physical environment and even human psyche.

Niji Akanni and BolaObot’s trust were proven right. Kiriji script delivers a real punch and a warning that the unity of Yoruba pledged at the end of the war is important to the future, particularly the marked the beginning of peaceful coexistence.