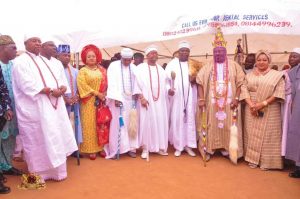 Shortly after presentation of staff of office to the new Onitele of Itele-Ota, Oba Ademola Eletu Ashorota during the week, the Olota of Ota, Oba Adeyemi Abdukabir Obalanlege felicitated the royal father.

Oba Obalanlege, who doubles as chairman, Ogun State Awori Obas Forum, appearing in an all-white agbada, also expressed his gratitude to Ogun State Governor Dapo Abiodun for his role in ending about 30 years of vacancy in the palace of the Onitele.

The Olota, therefore, prayed for the governor’s successful tenure, while acknowledging that the appointment of the Onitele followed the laid down due process to the letter. 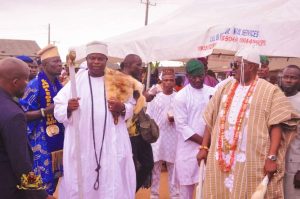 He also attested to the aptness of the new monarch whom he described as a man of outstanding profile, tasking him to provide leadership that would transform lives of his people for the better.

Similarly, the Olu of Itori, Oba Abdulfatai Akorede Akamo, who also attended the occasion, congratulated the new traditional rulers and charged him to be responsive to his subjects, majority of whom, he said, are already looking up to him for succour. 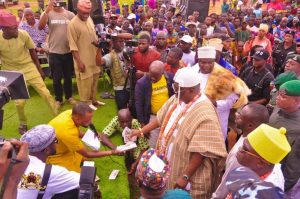 Oba Akamo tutored the Onitele of new demands of the traditional stool, which, he noted, is a contrast to those of the past when the palace was living on people of the towns and communities.

“Things have changed remarkably now, and the early, kabiyesi understand this reality, the better for him. Too much are expected from us as traditional rulers. May God make it easy for him,” he prayed.