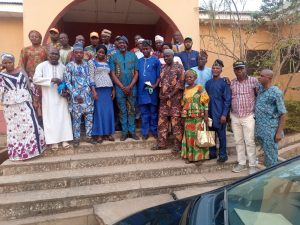 The senatorial candidate of the Social Democratic Party (SDP) for Ekiti Central Senatorial District for the February 25 national assembly election, Chief David Olusesan Arowolo, has met members of the Cocoa Farmers Association of Nigeria (CFAN), during which he blamed the general economic crisis in the state and across the country on the neglect of the agricultural sector.

Arowolo, who is also the Oluomo of Ijero kingdom, held the interactive parley with the association at the Nigeria Labour House, in Ado Ekiti, the state capital.

He lamented the parlous state that agriculture sector, particularly, cocoa and cocoa farmers have degenerated into.

He said that the old Western Region came into prominence as a result of huge investment in agriculture, especially, cocoa, enumerating the feat the region attained then to include: the Cocoa House, the first television in Africa, among others.

The candidate said that cocoa and cocoa farmers are in the present state because we have forgotten our foundation and neglect of the agricultural sector.

He said, “Today, out of over 193 countries of the world, Malaysia is the leading producer of oil and oil products.

“We have since abandoned agriculture, and cocoa, which gave us prominence and jettisoned our major cash crop.”

Speaking further, he lamented that those in position of authority today have deviated from the core values that Ekiti is known for.

He averred that Ekiti is not known for lies, neither is Ekiti known for any negative attitudes, but now unfortunately, majority of those who are in position of authority only feathered their own nests at the expense of the people.

He lamented that the love that binds Ekiti together as a people in the past has been lost.

He further told the farmers that he is contesting for the Senate, which he claimed requires the requisite connection, to be able to impact positively on the lives of the people, including cocoa farmers.

He promised to ensure that if given an opportunity to go to the Senate, he will use his connection to take cocoa back to its enviable height and ensure that consumers of cocoa as raw material come here to establish companies to create job for teeming Ekiti Central youths and improve the economic and financial proseprity of the people.

He pledged to boost the cocoa world in Ekiti, and ensure that cocoa farmers are put in their proper pedestal.

Responding, one of the cocoa farmers, Abidoye Jimoh, appealed to the farmers to support Arowolo to become a senator, promising that he would not disappoint if given the mandate.

He challenged the candidate to ensure that he fulfills whatever promise he makes to the farmers and the people, promising him of the farmers’ support in the election.

Another farmer, E.A. Daramola challenged everyone on the need to love one another because without love, nothing can be achieved.

Speaker after speaker from among the farmers prayed for the candidate’s victory and pledged to give Chief Arowolo all the necessary support to ensure to emerge victorious in the forthcoming February 25 National Assembly election, but challenged him not to disappoint them, but ensure that he fulfills his promise to the farmers and the constituents.

Present at the meeting were: chairman of Ekiti CFAN, Akindele Mustapha; a former chairman of the association, Samuel Oguntoyinbo; the Secretary, Temitope Anjorin and Omotayo Olayiwola.

Chief Arowolo was accompanied to the meeting by his campaign Director-General, Hon Ayodele Bankole, and other members of the campaign team.