Prince Atiba-Adediran Adedeji Shittu Ghazali Fatah of the Atiba Adediran Ruling House, Ese Apata Compound, Oyo, has joined the race to the next Alaafin of Oyo.

The Atiba-Adediran Ruling House presented the new entrant in a letter to the Baba Iyaji Quarters, Oyo. 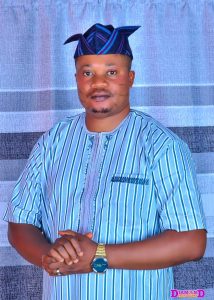 The ruling house stated that its decision to present Prince Adedeji Atiba-Adediran as its candidate was in line with the Atiba Descendants Chieftaincy Declaration (Ref. Number 486/55, dated 8th December, 1976).

The Atiba-Adediran wrote: “Our candidate Adediran Adedeji Fatah, remains our choosen one. He has the tenacity, capacity and ability, with vast exposure to the ethics of our empire to aspire for the vacant stool of Alaafin of Oyo.

“We all support his candidature, having been satisfied with his all required documents, humanity and his ancestral lineage of Omo-Oba Ese Apata. We believe in his experience, vast exposure and contribution to development of Oyo empire.”

Speaking on his ambition, Prince Fatah said he was eminently qualified to become the next Alaafin of Oyo.

He said; “I am eminently qualified for the throne of our fore fathers to take a central position and lead our kingdom from the present position of obscurity to a well-deserved one in the comity of traditional rulers in Nigeria.

“The role of traditional rulers of today is different from that of our fathers. Much work with ingenuity is highly expected from our Alaafin of today.

“The next Alaafin of Oyo is expected to provide solid leadership, seek for the economic prosperity and the progress of our kingdom, thereby transforming the inherited poverty to prosperity.

“My late father taught me the customs, culture and traditions of our fore-fathers from my infancy until he passed away. I have further improved on what he taught me by my personal efforts by regularly visiting the palace to learn more of our culture.”

After his West African School Certificate Examination, Prince Adediran Adedeji Fatah attended M&M Computer Networking for a Diploma Certificate course with the aim of advancing his knowledge in Information and Communication Technology to impact in nation building.

He thereafter attended Ladoke Akintola University of Technology (LAUTECH) Ogbomoso, Oyo State where he obtained his first degree in B-Tech. He is presently studying for his MSc in the same higher institution.

The aspiring Alaafin of Oyo is an entrepreneur and investor who is performing excellently as Chairman/ Chief Executive Officer, Royal Prestige Guest House and Resorts Nigeria Ltd, Ilorin, Kwara State.

He is also chairman of Adfat Prince Ventures, a booming electronic business in Omu-Aran, also in Kwara State.

Married and blessed with children, he promised to seek to promote peace and unity of his community at all times, if fortune smile on him and he becomes the next Alaafin of Oyo.