Family and associates of the late Alhaji Tajudeen Badmus, a US-based friend of the late fuji maestro, Dr Sikiru Ayinde Barrister, were treated to a captivating performance of a Barrister sing-alike, Hammed Ololade Barry 2 on July 23, 2022.

The event, held at the Euphoria Event Centre, GRA, Ikeja, Lagos, was the final burial for Badmus who passed away July 2021 in the US and for whom a special prayer session was organised before Barry2, dressed in Ankara fabric, mounted the stage. 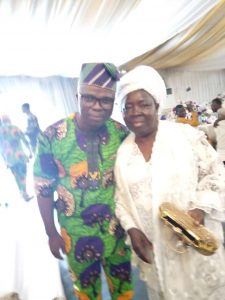 The tasteful party also had the famous chanter, Chief Sulaiman Ajobiewe doing panegyrics of the Ila-Orangun-born Badmus after which Barry 2 lavishly reenacted Barrister performance to the amazement of some guests who obviously never had previous contact with his nostalgic act and, thus, watched him with their mouths agape.

Barry 2 said he was honoured to have been given opportunity to entertain the Badmus guests, recalling his relationship with the late Badmus before and after Barrister had passed away on December 16, 2010.

He revealed that Barrister formally introduced him to Badmus through a conference call in what proved to be a valedictory meeting, for Barrister transited few months after.

“I met him for the first time during the burial for Alhaji (Barrister). He later invited me to his house in Igando when he came to Nigeria at another time. I was in his house in company of one Mukaila. We discussed at length and I returned home.

“Unfortubately, the next thing I heard was his death last year. He was a good man who showed interest in my music since Alhaji (Barrister) asked him to give me support. On that day, Alhaji was talking as if he knew his time was up. May both of them rest in peace,” Barry 2 prayed.

The Tabloid.net gathered reliably that Badmus, who shared physical semblance with Barrister, was survived by wives and children.