A book, in honour of a former Ambassador to Philippines, Dr Yemi Farounbi, was formally presented to public yesterday in Ibadan, the Oyo State capital.

Witnessing the occasion were family, friends and professional colleagues of Farounbi who will clock 78 on October 1, 2022.

TheTabloid.net gathered that the book launch, commemorative of Farounbi’s birthday, featured alongside the Yemi Farounbi Poetry Festival staged by the Poetry Enclave (POEN), Ibadan and held at the Alliance Francaise, Iyaganku. 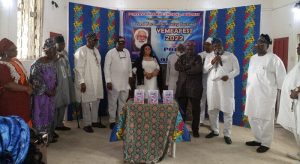 Director of the festival, Ebika Anthony authored the book while a former head of the Oyo State Universal Basic Education Board (SUBEB), Professor Soji Adejumo, was chairman of the gathering.

It was a moment of tributes and reminiscences, all focusing on the all-white Farounbi’s journey of life and his impact on human development.

To Adejumo, Farounbi is an icon, a giant and a universal personality whose sneeze naturally triggers cold in many.

Adejumo appreciated his choice as chairman of the event, saying that Farounbi “has made great and impactful contributions to national development, especially when he was the Nigerian Ambassador to the Philippines.”

He added that the Osun-born is an elderstatesman whose contact cuts across all political divides.

Anthony, who is also president of POEN, said “Poetry Is Our Life”, revealing that the festival was celebration of Farounbi for the good he symbolises as a lover and indeed metaphor of poetry.

Farounbi, in his remark, appraised the polity and expressed his optimism on future of Nigeria, urging those he called good people to rise up for the interest of the country.

He said, “All what the bad people need is for the good people to give up. But we must not allow this to happen.”

On Poetry, he stated, “Poetry is a good weapon to change the society. Media men and poets, not the politicians, chased away the tyrants in 1999. Why are we quiet now?”

He declared that he had no regret on his critical stance on the late Head of State, General Sani Abacha, insisting “I will abuse him; I am going to abuse him and nothing will happen.”