Apomu, the headquarters of Isokan Local Government, today played host to the reelection campaign team of Osun State Governor Alhaji Gboyega Oyetola in a carnival like procession led by Oyetola himself.

While hosting the governor in his palace, the Alapomu of Apomu, Oba Kayode Adenekan Afolabi publicly attested to performance of Oyetola in this first term and declared him fit and more competent to serve another four years to drive Osun people to a more stabilised state. 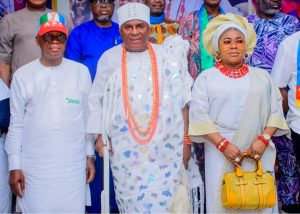 The Alapomu affirmed, “Oyetola deserves second term. He has done creditably well by paying attention to workers’ salary and welfare, revamping health care sector, building infrastructures across the state, despite dwindling resources and same time sustaining peace and security in the state.”

In his response, the satisfied governor made assurance to Apomu people to do more in spreading dividend of democracy throughout the state, if he is relected.

Olori Janet Afolabi was among A-class dignitaries that witnessed Oyetola’s historic visit to the Alapomu’s Palace. Others included wife of the governor, Alhaja Kafayat Oyetola, National Secretary of the governing All Progressives Congress (APC) Senator Iyiola Omisore and an appreciable number of the party’s leadership. 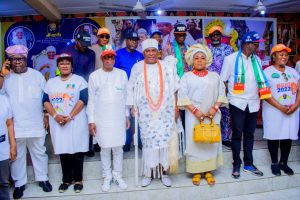