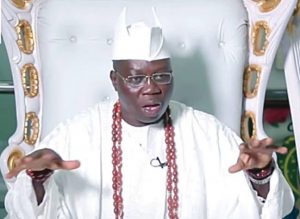 The Aare Onakakanfo of Yoruba land, Iba Gani Abiodun Ige Adams has said that the increasing attacks on Lagos-Ibadan express way was not unexpected, saying he had raised the alarm on the imminent attacks much earlier, even as the major road linking the South-west to the other parts of the country is becoming too volatile for travellers.

In a statement by his Special Assistant on Media, Kehinde Aderemi, stated further that the Lagos-Ibadan express way is too strategic to the South-west region and Nigeria as a whole.

He added that the South-west Security Stakeholders Group (SSSG)under his leadership, had earlier raised the alarm last year, while seeking partnership with the security agencies on the need to provide the needed surveillance along the road.

The Yoruba generallissimo pointed out that the alarm raised by the SSSG was contained in a letter dated November 4, 2022, which, he said was forwarded to both Oyo and Ogun governors, state commissioners of Police and the Director of state security services (DSS) in the two states.

Adams, maintained also that the
alarm came from the intelligence report at the group’s disposal,which he said had been neglected by the security agencies.

“It is sad that you find yourself in a situation where you feel helpless resulting from the lackadaisical attitude of the security agencies to the security challenges affecting us in the South west.

“The SSSG had severally offered to assist the security agencies in curtailing the security challenges along Lagos-Ibadan Express way.

“Our intention is to partner with the police patrol team in ensuring that strategic road is safe for travellers.

“The Lagos-Ibadan Express way is very strategic to the south west and Nigeria and it will be disastrous for us to ignore the road,making terrorists and kidnappers kings of the most important road in Nigeria, even at the expense of travellers.

Adams gave the assurance that the group is ready to partner with the police to secure the road, even as it would also continue it’s surveillance work in ensuring that the region is safe.

“Lagos-Ibadan Express way has been volatile for travellers,with several cases of kidnapping on the increase with police officers killed, ex-UI Deputy Vice Chancellor,and students kidnapped as gunmen had turned the route into haven for terrorists and kidnappers.

“We are ready to flush out terrorists and the kidnappers from their hideouts along Lagos-Ibadan Express way within two months.
We are also ready to partner with the security agencies on surveillance, so as to curtail the spate of insecurity across the region,”he said.

It would be recalled that students of Moshood Abiola Polytechnics were abducted last Friday along Lagos-Ibadan express way.