The presidential candidate of the Peoples Democratic Party (PDP), Alhaji Atiku Abubakar has urged members of the party to respect supremacy of the party’s constitution, rules, regulations and procedures.

He expressed this view, in reaction to Oyo State Governor Seyi Makinde’s submission, at the party’s South-West stakeholders interactive session held in Ibadan, the Oyo State capital on Wednesday.

Atiku acknowledged the significance of the 2023 presidential elections and the party’s need to dethrone the governing All Progressives Congress (APC), expressing his confidence of the desired result based on the development in Lagos and Oyo States chapters in the renewed harmony in the party.

The former Vice-president noted that in the current dispensation, starting from May 29,1999, the PDP is the oldest party in the country, saying the party has over time developed its own constitution, electoral processes, zoning of offices, power sharing and others to bring about the unity of the party and that of the country as a whole. 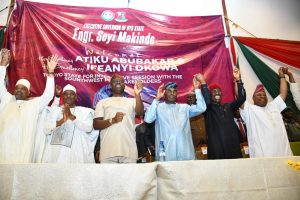 He, thus, declared that he is at home with membership of the party, irrespective of their State of origin but constitution, regulations and practices must be strictly adhered to.

Atiku affirmed that Makinde’s call is practicable under the party’s constitution, rules, regulations and procedures.

“So, those institutions must serve as guides to whatever changes we make. That is why we cannot do anything outside the constitution unless it is amended to reflect what we want them to be.

“Of course, we don’t say people should not have different views but all views must go through our constitution, rules and practices. Otherwise, we cannot give this country the kind of leadership they want. So, it is time for us to return the PDP back to power,” he said.

Makinde pointed out that for the South-west zone to feel reassured that the party is being inclusive, what he called the lopsided sharing of its national positions must be reversed before it is too late, but describing Atiku as a unifier out to return Nigeria to a united nation.

He explained that the PDP is inclined to restructure Nigeria and rescue it from the claws of the APC, the party, which he said, has caused the nation a setback in its seven-year rule.

However, he cautioned that the PDP must practise that it preaches by first unifying its members nationwide.