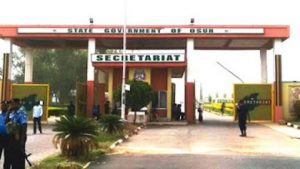 The Ataoja of Osogbo, Oba Jimoh Oyetunji Olanipekun and the Timi of Ede, Oba Munirudeen Lawal have broken their silence over what they called the status of Osun State Government Secretariat.

A January 6, 2023 release, jointly signed by the traditional rulers, a copy of which is in possession of TheTabloid.net, indicated that the Ataoja and the Timi were unanimous in their firm declaration disclaiming any conflict or controversy on the Secretariat.

“We want to reassure our people that the status quo remains as the State Government has not acted in anyway to deny any community of their rights and privileges. We blame political forces for attempting to politicise the issue to forment trouble and destabilize the state,” they stated.

The duo, thus, called on their people at home and in the diaspora to work for a peaceful co-existence across their communities.

“As royal fathers, we are convinced the Administration of Governor Ademola Adeleke has genuine intention to deepen inter-community peace and partnership for development of our dear state,” they concluded.