The Governor of Edo State, Godwin Obaseki says he has received intelligence reports that some politicians are importing thugs and firearms into the state.

This was disclosed in a statement issued by his Special Adviser on Media and Communications Strategy, Crusoe Osagie, in Benin City, the state capital on Thursday.

According to him, hoodlums are entering the state through riverine communities.

“The Edo State Government has received intelligence reports that some unscrupulous politicians are mobilising hoodlums from neighbouring states, to come in through the riverine communities and other land borders, to cause mayhem.

“We want to put the public on alert and warn them to be wary of strange faces and movements in their neighbourhoods.

“Once such suspicious persons are identified, members of the public are advised to alert security agencies and the government, so that appropriate action will be taken,” part of the statement read.

Obaseki, however, warned that he will do all within his power to ensure those responsible are apprehended and punished “no matter who they are.”

The Governor also vowed to sanction anyone who violates the regulations contained in the gazette on political gatherings, aimed at containing the spread of COVID-19 in the state.

The All Progressives Congress (APC) primary election is scheduled for June 22.

The governorship election will be held on September 19. 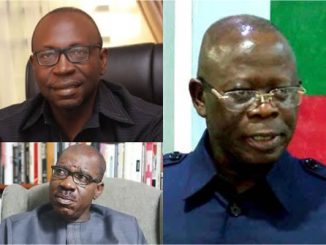