Provoked by what it called proliferation of illegal traditional rulers in the state, the Ogun State Government has expressed dismay over the trend.

At the quarterly meeting of the state Council of Obas in Abeokuta, the state capital today, the government specifically expressed its dissatisfaction against some people procuring fake appointment letters and parading themselves as monarchs without following laid down procedures as stipulated by the laws governing the obaship institution in the state.

Ogun State Governor Dapo Abiodun stated that the perpetrators do not mean well for the state and traditional institutions.

Secretary to the State Government, Tokunbo Talabi, who represented the governor, said “those individuals would not only bring confusion to the state but ridicule the traditional institutions”. 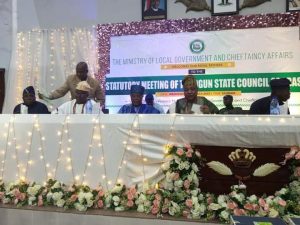 He declared that the present administration would no longer condone such unscrupulous activities.

He observed that the traditional institution remains a veritable platform to entrench good governance, hence, any administration that desires sustainable development, must collaborate with it.

Abiodun noted that his administration has continued to reverence the traditional rulers as our strategic partners in its commitment for an inclusive, just, fair, equitable, transparent, accountable and obedience to the rule of law.

“We shall not fold our arms and allow a few unscrupulous elements, under our watch, to tarnish the image of our state, rubbish our traditional institutions thereby bringing it to a state of ridicule”, he declared.

The governor, however, assured the traditional rulers of his administration’s relentless commitment to their welfare and well-being as it did on the recent 50% increment in the monthly subvention of the four traditional councils and much more within the available resources of the state.

While welcoming the traditioner rulers, Permanent Secretary, Ministry of Local Government and Chieftaincy Affairs, Mr. Kolawole Fagbohun said, the ministry has been working assiduously in ensuring that the welfare of monarchs are guaranteed and vacant stools are filled.

Fagbohun also said that the Ministry has successfully pushed through, in line with relevant laws and observance of customs, the installation of Orimolusi of Ijebu-Igbo and Negbuwa of Ibido who were also part of the meeting.

Chairman of the Council, Akarigbo and Paramount Ruler of Remoland, Oba Babatunde Ajayi, in his address, appreciated the governor for the 50% augmentation for the four traditional councils.

Oba Ajayi added that the issue of security is germane to the royal fathers, urging the government to make adequate provision of funding local security outfits in the state.