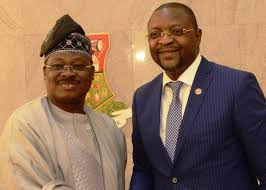 Honourable Minister of Youth and Sports Development, Chief Sunday Dare has emphasised how much the Oyo State has missed the leadership and political sagacity of the former Governor of Oyo State, Late Senator Abiola Ajimobi.

Dare said this, while delivering the keynote address at the Abiola Ajimobi Roundtable and 73rd Posthumous Birthday, organised by Senator Abiola Ajimobi Foundation (SAAF) and Institute for Peace and Strategic Studies (IPSS).

The event, which was held at the Senator Abiola Ajimobi Resource Center, Institute for Peace and Strategic Studies, University of Ibadan, had in attendance dignitaries across ranks and file, amongst which were, Oluwo of Iwo, Oba Abdulrasheed Akanbi, Chief Mrs Onikepo Akande a two time Minister, gubernatorial candidate of Accord, Chief Bayo Adelabu and Sen Teslim Folarin, Oyo APC gubernatorial candidate.

In his words, he said “Virtually all the major parties in Oyo State, APC, PDP, Accord Party have many internal tensions and contentions to contend with.

For the party, APC which I belong to, we certainly miss the leadership and political sagacity of Ajimobi.

I am sure if he is here with us today, APC in Oyo State would have been more vibrant, cohesive and a more viable political party.

The lessons from the life of Senator Ajimobi is that we need to have leaders that truly love the people and will serve the people with honesty of purpose and determination to make positive impact. As governor of this state for 8years and the first man to ever achieve that milestone, Governor Ajimobi greatly changed the fortunes of this state across sectors.

It is in the areas of reforms in education, security and urban renewal that his legacies will forever remain indelible”.

Speaking on the topic ‘Deepening Nigeria’s Democracy for Sustainable Development’, Chief Dare outlined ways to deepen democracy, sustainable development in Nigeria, which includes but not limited to, taking practical steps in growing our democracy, reviving the culture of public debate of ideologies/policies, finding great minds to write/formulate for the country, investment in education and public enlightenment, continuous improvement of the electoral laws, like the 2022 Electoral Law enshrined by President Muhammadu Buhari, effective criminal justice, strong and viable political parties.

The Agbaakin of Ogbomosoland also took out time to eulogise the Late Abiola Ajimobi, describing him as a leader, who loved his people, served with honesty of purpose and determination to make positive impacts, while enlisting some legacies of the former Governor, as such reforms in education, security and urban renewal.

While concluding his speech, the Most Outstanding Friend of Ibadanland said, “once again, I thank the leadership of Senator Abiola Ajimobi Foundation, for the honour to deliver this keynote address. I thank you all for your kind attention and may God continue to bless the memory of our leader, Senator Ajimobi”.